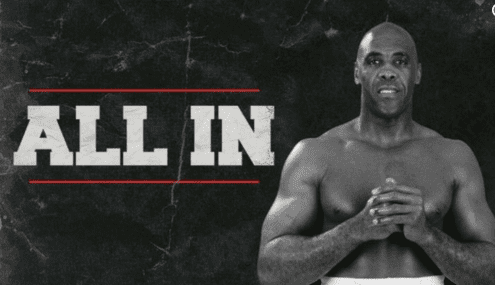 With anticipation at an all-time high, Cody and the Bucks’s supercard ALL IN stands to be one of the biggest wrestling events of the year. Top names from New Japan, Ring of Honor, and Lucha Underground have steadily been announced over the last few months, and speculation as to rumored surprises (I can think of one particular man that gravity forgot) showing up is giving the show a mystery factor that only adds excitement. One man who wasn’t announced, or even theorized to be making an appearance though: former WWE alum Virgil.

However, that’s not what the man himself would have you think. In fact, it appears he’s trying to sneak his way onto the event according to a recent Twitter post.

Sometimes the ugliest babies turn into the most beautiful adults. pic.twitter.com/HJt7G6VoLS

He even tagged Cody, The Young Bucks, and the ALL IN page to draw attention to his post. With Flip Gordon already going through a rigorous journey to appear at the Sears Centre, the idea that Virgil (who has a famed website lonelyvirgil.net that dictates him showing up unannounced to places to try and sell autographs) is trying to show up unannounced to the biggest event of the year to try and sell autographs… is hilarious.