They both agree that Undisputed Era and Moustache Mountain tore the house down with their opening match. Edge points out that this was a great match, and adds that all four men did a phenomenal job. He notes that Tyler Bate is special and he thinks WWE can do something big with him in the years to come. He’s also quite happy for Roderick Strong given the success he’s having right now.

Edge says that if he were to critique the match, there was just one little thing that bothered him. He points out that there was never a point in the match when the babyfaces, Moustache Mountain, appeared to have Undisputed Era beaten. He notes that one near fall could have been broken up by one of the Undisputed Era members, just to let the fans know that Moustache Mountain could of, or maybe should have won the match. 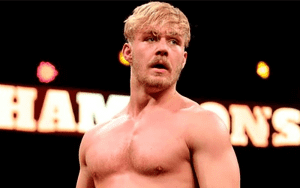 Both men enjoyed the Velveteen Dream/EC3 match. Edge points out that Velveteen Dream is a special performer, and he thinks he’ll be unstoppable at some point in the future. Christian thinks EC3 is a natural heel, and he thinks that’s where EC3 is going to make the biggest impact moving forward. He notes that as a heel, EC3 cuts “money promos”.

Edge is a big fan of Shayna Baszler, noting that she really plays the role of a bully well. He particularly likes Baszler’s stomp moves, which look devastating and legitimate in his opinion. He thinks Baszler should save those moves for finishes or for injury angles because they look so good. Christian also notes that as a babyface you can’t forget to sell, even while you’re on offence. Edge agrees, adding that there were a couple of times during the end of this match when it looked like Kairi Sane forgot to sell.