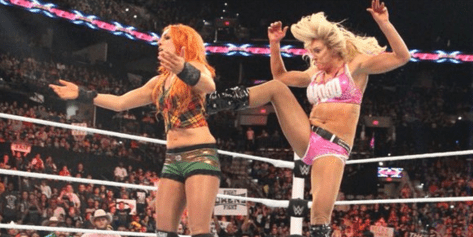 The Irish-Lass Kicker hasn’t been shy of expressing her outrage at Charlotte Flair for constantly receiving special treatment within the WWE. Lynch is still irate at her title loss from last Sunday at SummerSlam when the Nature Girl broke up the disarmer with Natural Selection and won the SmackDown Women’s Championship. Now, she’s taken to Twitter to remind the WWE Universe that Charlotte was the one who originally broke their friendship when she turned on Becky a while back.

The difference between me and you, @MsCharlotteWWE:

You waited until my back was turned.

I waited until I could look you in the eye. pic.twitter.com/T5vIJ8k5Th

This is honestly a fantastic reminder as to why Becky isn’t in the wrong. Will they play up this past moment in their future angle? Guess we’ll have to wait until Tuesday to find out.