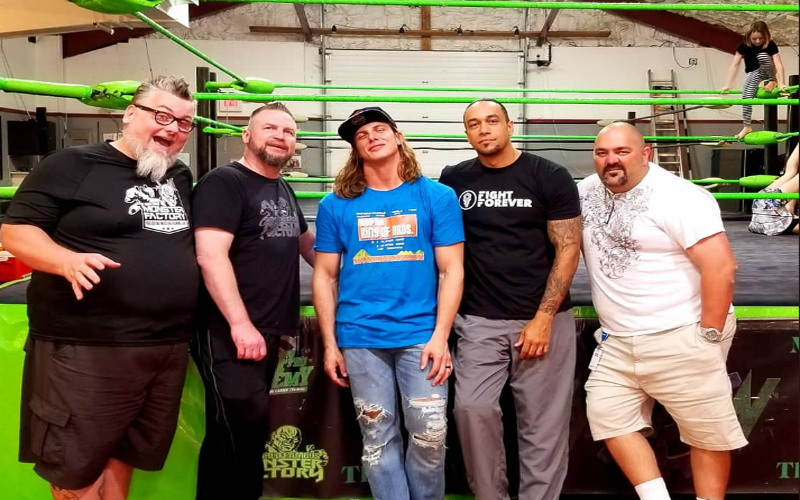 It’s official! Matt Riddle has signed with WWE and is scheduled to report to the WWE Performance Center in Orlando, Florida.

Pro Wrestling Sheet is reporting that Riddle stopped by the New Jersey-based wrestling school where he had trained to become a wrestler following his MMA career. The school – named The Monster Factory – have multiple graduates who are now employed by WWE. This includes, but is not limited to Steve Cutler, Sheamus and The Big Show.

Riddle thanked his coaches, taking a few screenshots with them. His coaches specifically include Danny Cage, Punishment Martinez, Bill Wiles, Blue Meanie and Q.T. Marshall. Besides Marchall, all are pictured in the images below.

You can find the tweet by The Monster Factory showing Riddle below:

Matthew Riddle stopped by tonight on his way to @WWE!

His coaches: Blue Meanie, Danny Cage, Punishment Martinez, Bill Wiles and Q.T. Marshall (not pictured)
He will join other graduates, Sheamus, Big Show, and Steve Cutler at the WWE! Very proud of him!

Cage is the head of The Monster Factory. Back in 2014, he spoke with MMAFighting.com on Riddle coming to learn wrestling and immediately picking it up.

“The only problem he’s had really is that he has to realize that sometimes the best lessons learned in wrestling aren’t always learned in the ring. He’s used to MMA, so he always wants to go go go (in the ring and in training). But promos and psychology are part of pro wrestling.”

Riddle is set to report to the WWE Performance Center on September 4.

How long do you speculate it takes for Riddle to debut on NXT TV? Are you excited for his future in WWE? Let us know in those comments below.