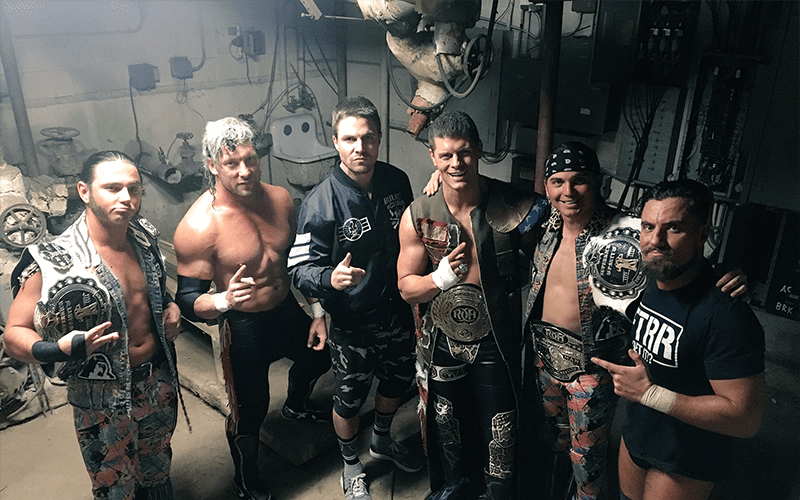 The American Nightmare took a media call earlier today to promote his self-financed event at the Sears Centre next week dubbed ALL IN. During that call, Cody was asked about the possible future of members of the Bullet Club Elite considering that most of their contracts with New Japan and Ring of Honor are set to expire soon.

According to PW Insider, Cody reveals that he, the Bucks, Kenny Omega, and Hangman Page have all made a verbal agreement — that whatever they do…they do together.

As far as what’s next, I really wish I could answer. A lot has happened in the last few weeks. A lot of discussions about the future.   One thing that’s special about this, and I have to be rather cagey in answering, one thing that is special about this group is we have verbally committed to each other and I don’t know that that’s ever been done in the history of professional wrestling, where I have verbally committed to the Bucks, the Bucks, Kenny Omega, Hangman Page.  There’s this verbal commitment that the next step we take because it’s no secret.  Our contracts are all up…what happens next?  The next step we take, we’re going to take it together and we’re going to take it as a family.  It could be the dumbest move ever.  Wrestling is sorta a shady business or we can do what my gut tells me, the right call.

Rumors have been floating around that the WWE is desperate to bring in the Young Bucks and Kenny Omega, and have been actively attempting to sway Cody back as well, especially after the success he has achieved as an independent talent. However, this statement makes it appear that Cody may also be interested in forging his own path, and with the assistance of the very popular Young Bucks, he could potentially find massive success.

What do you think RingSide? How would you interpret the Nightmare’s words?