She played soccer as a child but fell out of love with that sport as she grew older. She went to post-secondary school for five years but doesn’t have a degree because she didn’t really enjoy anything that she studied. She made the decision on her own to try professional wrestling and began training with former WCCW Wrestler and Manager, Skandor Akbar.

She points out that Akbar was great to her, and they came up with a price that was reasonable for her since she was living on a budget. After training with Akbar for a while she began training with Booker T in Houston. This entire time she was hiding her training from her family, and she’d say she was working late in order to cover up why she was coming home so late at night. 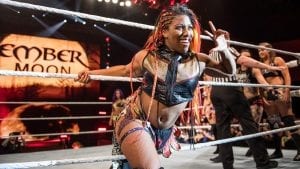 Moon mentions that her real name is Adrian, but since she was bullied so much as a child she didn’t see strength in that name. She decided to change her name in order to create an alter ego that she was comfortable wrestling as. Her father drove four and a half hours with her to watch her wrestle her first match, and she was paid $10 for that match. Her father didn’t care as long as she continued her education.

Ultimately, Moon realized that she was wasting money in school because nothing made her happy like wrestling did. She didn’t want to work a job that made her unhappy, so she decided to pursue a full-time career in wrestling. Moon mentions that Booker T really added a new dynamic to her in-ring work, and he was the person who convinced her to do her Eclipse from the top rope. She was doing the move off of the second rope initially because she’s afraid of heights.