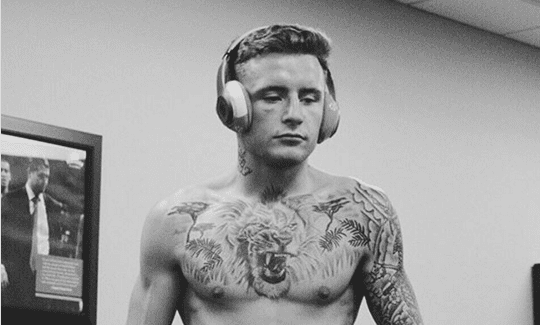 Tensions were running high during last night’s Bellator 204, especially for the James Gallagher versus Ricky Bandejas bantamweight bout, which saw Gallagher get right into the young New Jerseyan’s face prior to the fight beginning. This added psych out gave the “Strabanimal” a lot of fire in the opening moments, putting pressure on Bandejas and smothering him at all corners. Unfortunately for Gallagher, Ricky was just waiting to pick his spot, and after a slice kick and some mounted punches, was knocked out in the very first round. Bandejas would mock Gallagher post-fight, mimicking the very same pose that Gallagher used when he was talking trash.

Now, the 21 year old stud from Ireland has posted on Instagram, admitting that he lost the fight fair and square, but that it won’t effect his drive or personality for future fights.

He caught me I got beat fair a square. I’m 21 years old I’m still a fucking animal I will be back!! I love this game. It’s what I do. I’m down but not broke he caught me lucky I got clipped I went In on my Shield I’ll go out on it. I’m an animal. Fair play to him the whole game knows him now. Let’s go again. I’m coming back! Thank you everyone for all the support. To everyone glad fuck you haha I just got paid your years salary for doing something I love. I put my money where my mouth is! Thanks for the support I’ll be back December. There’s no one who has done what I have at 21 years old. I’m still that cocky mother fucker I am when I win and I’m still that cocky mother fucker when I loose. Thank you to everyone whose behind me.