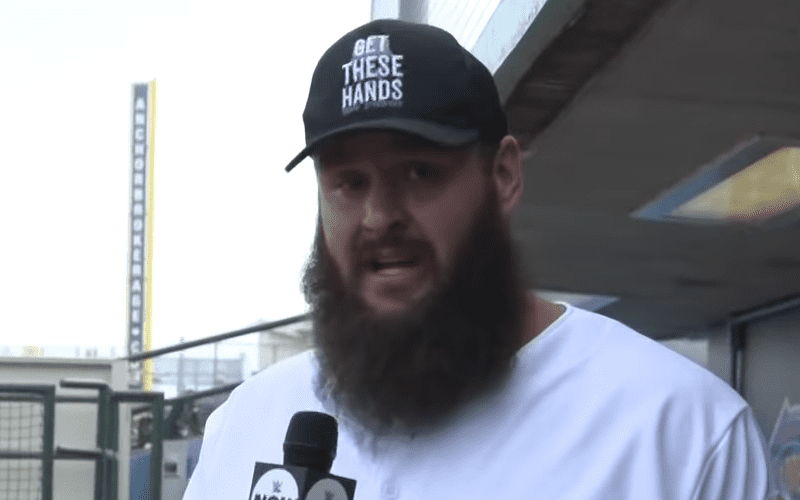 Braun Strowman is set to face Kevin Owens with his Money in the Bank contract on the line this Sunday at SummerSlam. Ahead of that match, Strowman was interviewed by Cathy Kelley on WWE Now.

Strowman first addressed why he has a vendetta against Owens, as many fans have the mindset that Strowman has no real motives behind his attacks.

“Yeah, lately he has left a nasty taste in my mouth. He connivingly sneaks around trying to manipulate people to get them to help him out. I see right through that, so I’m looking forward to getting in the ring with him this Sunday and letting him get these bad boys [lifts hands].”

On the same vein, Strowman reveals if he is worried putting his contract on the line against Owens, as he could very well lose the guaranteed shot at a Championship.

“No, that’s how confident I am going into this match on Sunday, that I’m willing to give the most prized possession in my being that I have in WWE right now. I’m putting it on the line against Kevin Owens, and the ‘monster among men’ is gonna do what he does best, and that is destroying everything in his sight.”

Strowman explains in detail what his current diet is heading into the match against Owens.

“So leading up to this, I have really dialed down on the diet and the gym workouts. I’m trying to clean my diet up and get my Cardio back up to where it needs to be cos I haven’t had any big, long matches and everything, so I’ve been working with that. So I switched back to eating meal prep stuff- so I’ve been eating around 6-7 meals a day that consists of around 10 ounces of cooked meat- either beef, chicken or fish, a cup of rice and vegetables. So yeah, I’m putting away like 4 and a 1/2 pounds of cooked meat a day right now. I’m kind of a carnivore.”

Finally, Kelley asks Strowman what his prediction is for the RAW Women’s Championship match between Ronda Rousey and his Mixed Match Challenge partner, Alexa Bliss.

“Well, of course, Alexa Bliss. I mean, as fierce as Ronda Rousey is, she is a rookie here in WWE. The things that she has done around the world in her previous combative sports are second to none, she is, like they say, the baddest female on the planet. Don’t underestimate the ‘five feet of fury.’ I’m sure she has some kind of trick up her sleeve.”

Who do you feel walks out victorious in Strowman’s match? Have you ever seen a diet that huge? Let us know your thoughts and reactions down below in the comments.