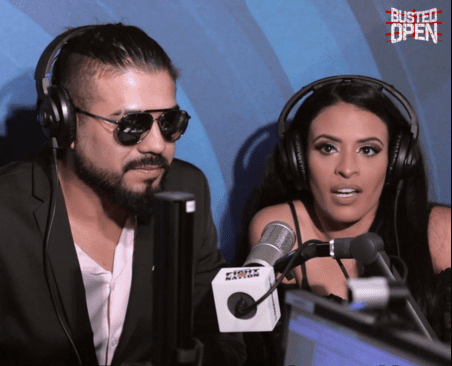 El Idolo was sort of floating in a perpetual limbo for a while in NXT. He had no clear direction, nor any motivation to compete at the highest of levels. That all changed when a woman from his past, Zelina Vega, would return to light a fire under his spirits. Their pairing proved to be a winning combo as Almas went on a pretty lengthy win streak, and even captured the NXT Championship. Now on the main roster, Almas and Vega look to make an impact as they prepare to face Lana and Rusev on the SummerSlam Kickoff show.

On a recent episode of Busted Open Radio, guests Zelina and Andrade talk about their still growing relationship, and Vega in particular opens up about Almas helping her improve in all aspects of the business.

I think more than anything, he has become such a part of me. I remember when I first was going to have my match with Lana, I was like, “Wait, my entrance, it’s alone-without him? What do you mean?” We ended up doing it together, but he’s become such a part of me. He’s helped me in the ring, he’s helped me with-we talked about-psychology, and picking your spots and making things make sense. Especially at my size, I thought at some points, “Well, I can’t do any power moves. How can I do this?” And he instantly comes up with, “Ok, let’s try this. Let’s use this to your advantage. Let’s not look at it as a disadvantage. Let’s look at it like an advantage and how can we use it against people. They’re gonna look at you and think less, let’s use that against them.”

Watch this clip below.

"He's helped me in the ring, he's helped me with psychology. He's become such a part of me."@Zelina_VegaWWE explains the importance of her pairing with @AndradeCienWWE for both of their careers.@davidlagreca1 @TheMarkHenry #SummerSlam pic.twitter.com/XdoqBwnmRs