The current WWE roster of superstars has a lot of people on it. Sometimes it is impossible to remember everyone on any given roster for that matter.

But WWE recently sent out a very interesting survey to their fan counsel that left off a couple key names when asking who is your favorite superstar.

As you can see, John Cena and Brock Lesnar aren’t on the list of options. It’s always interesting when things like this happen, but it’s also hard to tell what it means sometimes.

After all, sometimes these surveys are sent out by third-party companies that have no real connection WWE except for a contract to send out surveys and collect data to send back to WWE. But, if WWE sent out the list of people they wanted on the list of possible favorite superstars, it’s pretty interesting that those two names are missing.

There are also a couple other interesting names left off as well, but none of them really have the impact of Cena or Lesnar. Except for The Rock and he hasn’t been an active Superstar for years. 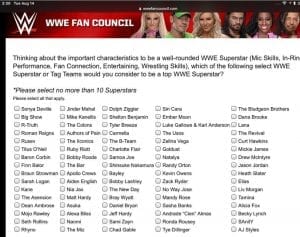