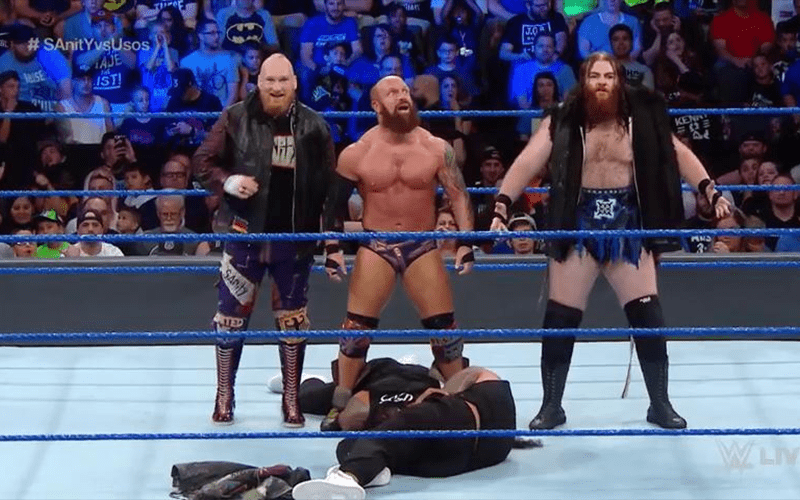 One would expect in the go-home show for SummerSlam social media would be ablaze with questions, thoughts, and scenarios heading into the PPV this weekend. What nobody seemingly anticipated was that a new attire debuted on SmackDown Live would be the hottest topic from the show.

Killian Dain of SAnitY debuted a dark blue attire during SmackDown Live, as SAnitY took on The New Day. This was a very distinct change from the attire Dain has worn so far in WWE.

@JWrestlingV2 on Twitter was furious at the decision, calling SmackDown Live producer Road Dogg out, demanding answers on whose idea it was for Dain to wear such a distinctly different attire.

Dogg, not having any of this, replied, blocking the user.

Sorry dude, I didn’t see this tweet. You just hate me, I get it now. I can fix this issue for you. I will relieve you of your pain! #blocked

User @HalloRiched asked whose idea it was, reiterating the point made by the previous user. As you can expect, Dogg responded.

David, thats just your opinion dude. And btw, it was his idea and he might think your opinion is absurd and ridiculous. But, you keep doin you dude!

This led Dain himself to confirm the design and idea was entirely his, also joking about the idea of people trying to force a singlet on him.

JJ Wrestling Creations would later also confirm on Twitter that they created the attire worn by Dain (seemingly at his request as Dain explained above). You can also see a better perspective of the attire itself in their attached photos.

Thanks to @KillianDain one of our creations was on #SmackdownLive last Tuesday! pic.twitter.com/z1Q6HmLWBH

Do you like or dislike the attire? Do you care what he wears at all? Let us know in the comments section below.