Garcia asks Lashley about his plans for SummerSlam. Lashley points out that he’s not sure what he’ll be doing at SummerSlam at the moment. He jokes that he’ll be in catering at some point, and we’ll see what happens from there. He adds that he’s been working with Elias a bit as of late, so perhaps WWE has something in mind for both of them at SummerSlam.

Garcia asks Lashley what made him want to try mixed martial arts. Lashley points out that you only live once, and after leaving WWE the first time he really wanted to challenge himself. He wanted to put himself in uncomfortable positions and MMA certainly did that. 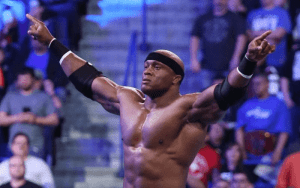 Garcia asks Lashley about his future goals in the wrestling business. Lashley says he wants to continue to pay his dues, win Championships, become a household name as well as a future Hall of Famer at some point down the line. Garcia points out that Lashley has a great attitude and a tremendous work ethic, and she thinks he’s well on his way to accomplishing those goals.

That sums up this week’s episode of Chasing Glory. You can listen to the show yourself anytime here, and I’ll catch ya next week for another recap!