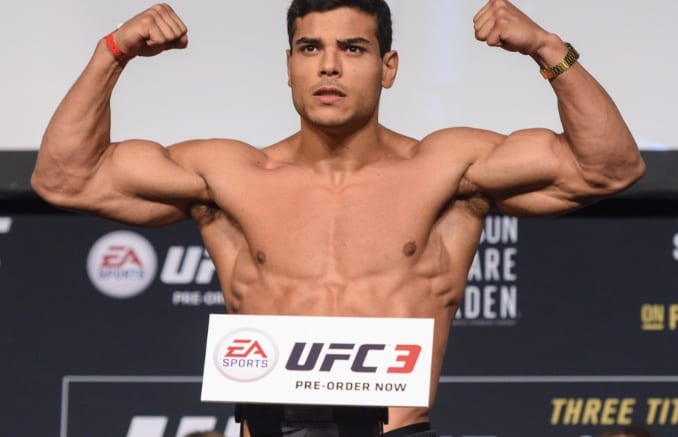 As reported by MMAJunkie, UFC star Paulo Costa has criticised Middleweight Champion Robert Whittaker as he prepares to return to the octagon at UFC 230.

Costa, 27, holds a 4-0 record inside the UFC octagon with a 12-0 professional record overall, with the Brazilian’s last victory coming against Uriah Hall back at UFC 226. ‘The Eraser’ is currently scheduled to square off against Yoel Romero, the same man Whittaker defeated earlier this summer in Chicago, at Madison Square Garden in November.

Paulo was recently present at the tapings for Dana White’s Contender Series Brazil, during which time he spoke about several topics in the lead-up to the UFC’s third annual MSG show. One of the topics, as we’ve noted, was the champ Robert Whittaker, and Costa had some interesting remarks to make when asked about a potential showdown with Bobby Knuckles.

These are brave words coming from Costa, but given how efficiently he’s been able to dispatch of his opponents thus far, you could certainly argue that he shouldn’t fear anyone in the division. Middleweight has always been an intriguing weight class throughout the years, but now, it seems as if it’s stronger than ever.

The 230 card is set to be a showcase for MWs in more ways than one with Ronaldo Souza vs David Branch & Derek Brunson vs Israel Adesanya being pencilled in for the show, with Chris Weidman vs Luke Rockhold 2 also being heavily rumoured.