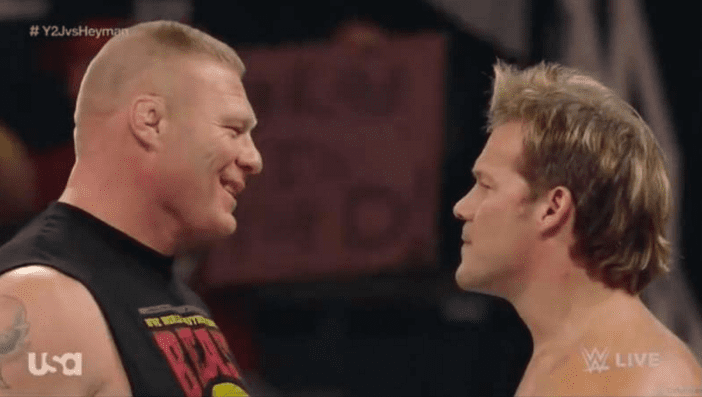 You read that right. Chris Jericho recently sat down with the legendary JR for an episode of the Jim Ross Report where they discussed Jericho’s current NJPW contract and what his run as IWGP Intercontinental Champion means for the future of the promotion. Jericho referred to himself as the Brock Lesnar of New Japan, carrying a prestigious title around and only showing up every so often. This led to Jericho giving a thorough breakdown on the Beast Incarnate, and why he actually admires the Universal Champion.

I think a lot of people have animosity towards [Lesnar] because of that [favorable deal], but I don’t. I admire the guy. I would like that deal and I’m not so sure that I won’t get a deal like that at some point. At least in New Japan I did, so I remember years ago someone said, ‘you can’t blame,’ I think they were talking about [Hulk] Hogan when Hogan had that huge deal with WCW and he got a percentage of the pay-per-views and he was making this money, they’re like, ‘you can’t blame Hogan for getting the deal.’ You can’t blame freakin’ LeBron James for going to [NBA’s Los Angeles Lakers] for $40 million for two years. Blame the company! Blame the owners! Blame the team! Blame the company! Blame Vince [McMahon]! Don’t blame the guy [who received the favorable deal]. Yeah, I’m always happy for the [performers], whoever they are, whether you like them or you don’t like them when they make good money because I still think for years, if you’re liking at the NFL, NBA, NHL, WWE salary caps, who’s making the least amount of money percentage-wise? It’s always the WWE [performers], so anybody to can make really, really good money in the [pro] wrestling business, I never hold any animosity towards them because it just means if they can make more money, I can make more money too at some point.

Jericho has always proven himself to be a brilliant man of business as well as an exceptional professional wrestler, and I have to totally agree with him here. Brock gets a lot of flack for working few dates for a heavy paycheck, but isn’t that the dream?