Edge and Christian open today’s show by speaking about last week’s episode of NXT, specifically the NXT Title match between Aleister Black and Tommaso Ciampa. Edge notes that he made a point to watch this match and he’s a huge fan of both men. Christian is also a huge fan of both men, and he really loves Ciampa’s heel work. He thought both men told a terrific story and by the end of the match everyone was on their feet. 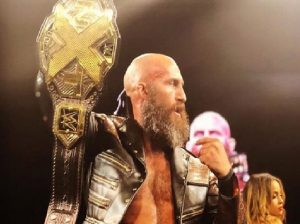 Christian also thought it was neat that this Title change happened at Full Sail and not at a big Takeover show. He thinks it’s important that the company doesn’t condition the audience into thinking that Title changes can only happen at big shows, and a surprise finish like this tells the audience that anything can happen at any show. He thinks WWE should have more surprising finishes on house shows as well.

Edge points out that the end of this match allows Black to claim that he wasn’t defeated fairly, and eventually we might even see a triple threat match between Black, Ciampa and Johnny Gargano. He’d love to see a one-on-one match between Gargano and Black at some point as well.