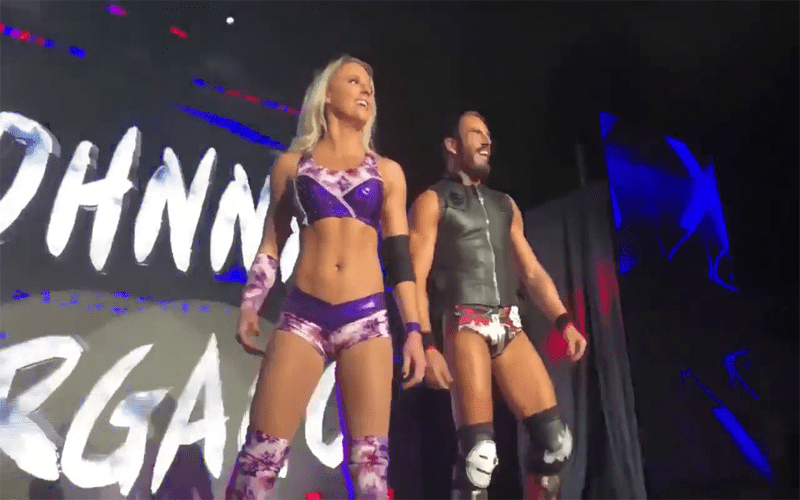 Johnny Gargano is set to face Aleister Black and Tommaso Ciampa at NXT TakeOver: Brooklyn IV for the NXT Championship. In the meantime, Gargano is touring for NXT with his wife Candice LeRae.

While in Arizona, Gargano was interviewed by AZ Central, where he revealed how he and LeRae actually met.

“I remember [Candice] brought her cousin to the back, and they were just hanging out talking, and I decided I was going to try to get to [Candice] by talking to her cousin about her cell phone. It didn’t really work that well, but we developed a friendship.”

Gargano explains how both he and LeRae are just nerds at heart.

“I’m looking around our apartment, and there’s landspeeder there, there’s a lightsaber there, all kinds of ‘Star Wars’ stuff. I just went crazy on ‘Spider-Man’ the animated series, like old-school action figures from the early ’90s, I bought all those. So our apartment is glass cases filled with toys and helmets and things like that. eBay is very dangerous to me. … Toys ‘R’ Us was going out of business, and my wife wanted one of the landspeeders. And I was like, ‘I don’t think you’re going to fit in it,’ because it’s for little kids. But she’s like, ‘No, I only weigh like 110 pounds, I can definitely fit in that.’ So I said, ‘OK, if it gets slashed to 50 percent off,’ I’ll go buy you one of those little-kid landspeeders that you can drive around our apartment. And she actually does.”

Finally, Gargano also commented on why NXT has had such success with hardcore wrestling fans.

“Some of the most hardcore, nitty-gritty fans in the world are independent-wrestling fans, and I think a lot of those came with us to NXT.”

Who do you have walking out of TakeOver with the NXT Championship? Were you aware Gargano and LeRae were a couple before LeRae was signed to WWE? Sound off in the comments below.