Ross says he loves Kevins Owens and if he was starting a promotion Owens would be at the top of his “most wanted” list. Owens took a huge bump from the top of the cage during his match against Braun Strowman, paying homage to Mick Foley who took a similar leap from the top of Hell in A Cell in the same city 20 years ago.

Ross notes that he’s a big fan of Drew McIntyre. He thinks McIntyre needs to be towards the top of next year’s WrestleMania card. He also thinks Mojo Rawley is taking steps forward, winning matches with extreme physicality and that has caught Ross’ attention.

Ross likes Cien Almas as well and he enjoyed his match against A.J. Styles on last week’s Smackdown. However, he thinks the lack of buildup for that match might have affected it negatively. He adds that he loves Zelina Vega’s facial expressions. 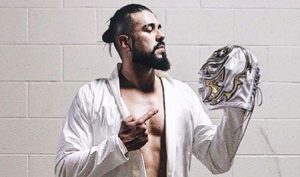 Ross mentions that Samoa Joe is working like a beast right now, and he’s a step or two away from being where a lot of people think he should be according to Ross. Ross says he’d embrace Joe as WWE or Universal Champion without question, and he would love to see him fight Lesnar but the ship has probably sailed on that.

He says he’s not surprised to see Hulk Hogan return to WWE, adding that he predicted Hogan’s return to the company recently. What Hogan did was terrible and he thinks Hogan’s aware of that now, but he doesn’t think Hogan should be penalized forever for that mistake. Hopefully Hogan’s learned his lesson and he’s proud and happy to see Hogan back in WWE.