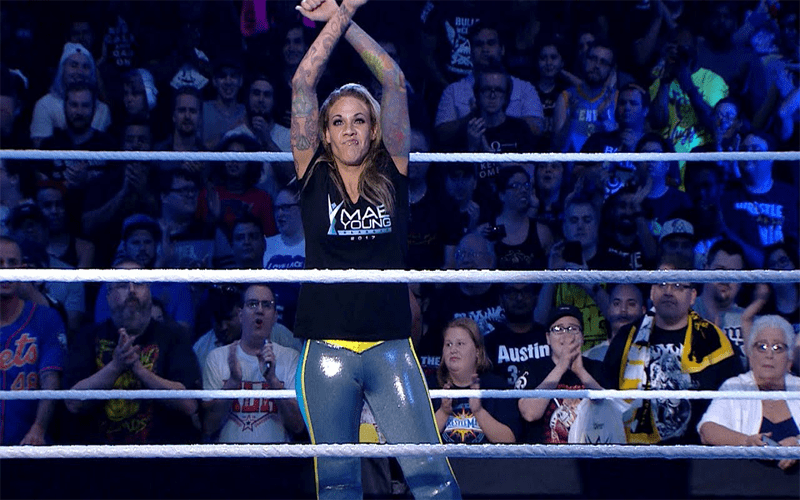 Mercedes Martinez was one of the 32 participants in the Mae Young Classic last year. While she didn’t win the battle last year, she did make it to the semi-finals before Shayna Baszler got the best of her. Now she has a second shot in the annual event this year, and she looks to go all the way.

Martinez had the opportunity to speak to Newsweek, where she revealed the pressures of the Mae Young Classic. wanting WWE to have an all-women’s show, not being a stereotype and having her second opportunity to compete.

Martinez first commented on not being a stereotype.

“I’m Puerto Rican and we kind of get lumped into the whole ‘Luchador’ sense of it. I don’t wear a mask, I’m not a high flyer, but we get stereotyped. I want to make sure with my wrestling and everything I do, I represent Puerto Rico. I want everyone to understand that not all Hispanics can high fly, we are also there to throw down and get the job done. My goal is to be a role model, and I’m very happy and proud to represent Puerto Rico and women.”

On the independent circuit, Martinez is well-known for her achievements. This was touched on by WWE during the first Mae Young Classic and may have helped her make it to the semi-finals. With the idea floating around about an all-women’s show for WWE, Martinez took the time to comment on it.

“I hope there to be an all-women’s show for WWE. Not just a tournament or special occasion, but maybe a weekly thing that’s just all women’s wrestling. That’s what we’re missing. We just don’t want to be an attraction, we don’t just want to main event a pay-per-view … we want to be the show. We want to men to be the attraction for once.”

On getting another shot at winning the Mae Young Classic, Martinez had a lot to say. She noted what the pressure is like to perform there.

“It’s now time to win it all. I came close last year, I lost to a good friend of mine. This is the year to take it home, there’s no stopping me. I have a lot to prove, and I’m still proving myself no matter how many years I’m in this business. … There’s a lot of pressure, there’s always pressure. I think the pressure now is making sure I’m ready and whatever I did last year, I bring 100 percent more. Me going to the semifinals with Shayna, it pretty much solidified that Mercedes can go. There’s a lot of pressure for me to go to the finals and win it this year. So I’m not taking this very lightly. It doesn’t matter who is in front of me, I’m ready to go in there and step up my game 10 times more than last year. I proved last year I could go the distance, and this is the year I have to take it home, no matter what. I’m ready.”

Finally, Martinez commented on women she is excited to see compete in the Mae Young Classic.

“I’m very excited for Jinny, who I’ve been watching for the last two years. Her hard-hitting style and her aggressiveness, we’ll match very well. For Kaitlyn, I know she’s been training in Miami so I’m excited to see her come back and see what she can do. Even Io Shirai, who I was hoping to have a chance to wrestle before she got picked up when Stardom came down to the U.S. It’s a very talented core of women, but there’s new faces, new talents. I have to work ten times harder than the young bucks.”

Who do you expect to win the Mae Young Classic? Who do you want to win? Sound off in the comments below.