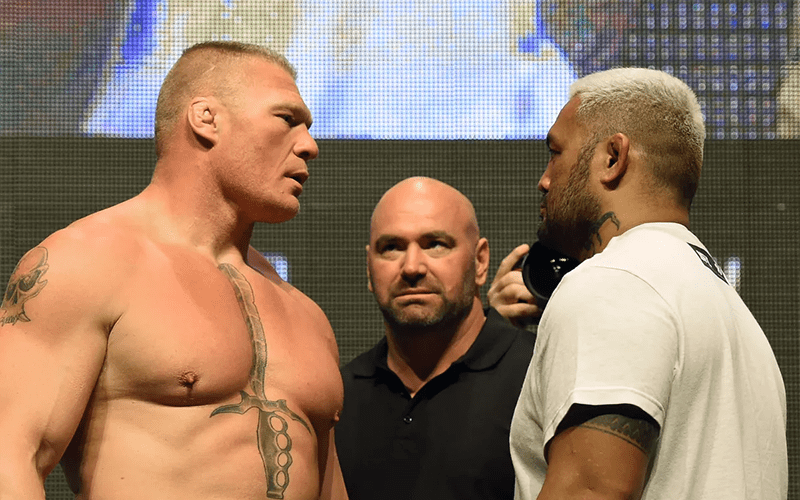 While speaking with MMA Fighting, Mark Hunt’s attorney Christina Denning mentioned that she may amend their lawsuit against the UFC, Dana White and current WWE Universal Champion Brock Lesnar now that Lesnar has returned to the company for a bout with Daniel Cormier.

“We debated whether or not to, while the motion to dismiss is pending, to alter the complaint again, to keep adding more facts regarding the way that the organization works and perhaps the unfairness of it. So, that’s something that we have not done yet, but we definitely [might] with all the buzz around [Lesnar] coming back.”

Denning mentioned that they are waiting on the judge’s decision and indicated that an order could come out some day soon.

“I kind of have a feeling that the judge has heard enough of our arguments and the complaint hasn’t changed a whole lot. So, there might be just an order that comes out some day soon that tells us what’s in and what’s out.”

For those not aware, Hunt sued the company after his loss to Lesnar, which was overturned after Lesnar subsequently failed drug tests. Hunt sued for racketeering, fraud, battery and civil conspiracy.

Below is the original complaint.

“LESNAR, WHITE, and UFC, acted in concert as set forth fully above, to defraud HUNT and commit a battery against HUNT by a scheme to knowingly pit HUNT, a clean fighter, against LESNAR, a doping fighter, to the wrongful benefit of Defendants and to the detriment of HUNT,” reads Denning’s initial amended complaint, which was filed in June 2017. On information and belief, WHITE and UFC were intentionally delaying the announcement because LESNAR was using banned substances and needed additional time in order to circumvent testing procedures.”