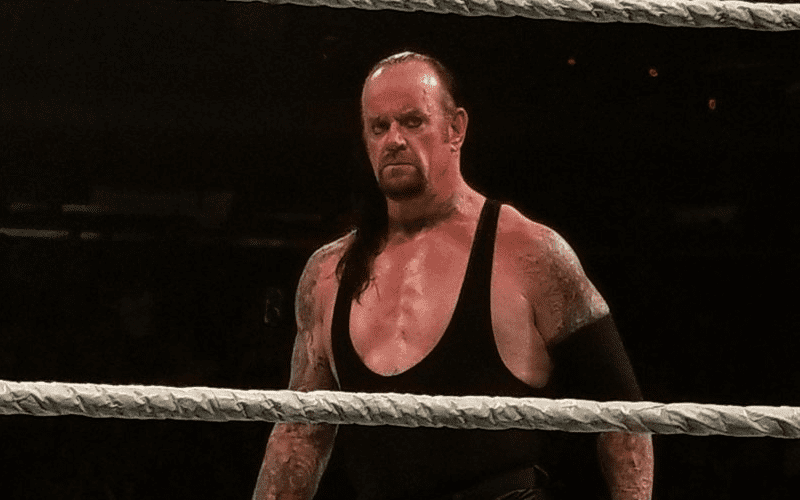 The Undertaker made his return to Madison Square Garden on Saturday night where he took part in a 6-man tag match. Taker teamed with Braun Strowman and Roman Reigns to take on Elias, Baron Corbin, and Kevin Owens.

Before the match even started, Elias had a chance to work the crowd where he wore an Undertaker hat and mocked The Deadman by playing Taker’s theme for a second. The song he sang wasn’t about Taker though.

The pop of the night was for The Undertaker as he made his way to the ring. MSG has a shorter walk than most but he used up every second possible to make the most of it for the live crowd.

Reports were that there was a good 5 minutes of cheering and chanting for Taker before the match even started. Taker stayed out of the match until he took a hot tag from Reigns.

If you’re wondering what it takes to get the Big Dog cheered in NYC, it’s tagging in The Undertaker.

Taker was in, and the crowd went wild, but it was bad news for Kevin Owens who took a tag on the other side. KO was soon taking a Tombstone piledriver and the match was over. The Undertaker won the match for his team in MSG.

Undertaker with a standing ovation that went past 5 minutes #WWEMSG pic.twitter.com/LZAxis1TVk

Crowd actually turned face on Roman once they realized he was going to get the hot tag to Taker. Reminded me of the kid in 4th grade who would always bully me unless we were on the same kickball team, and then he'd be super encouraging #WWEMSG

Just in case you were wondering, yes Roman Reigns was booed extremely heavily by the MSG crowd. This should give WWE an idea how he will be accepted at WrestleMania 35 just across the river.

lmao extremely loud boos for roman my ass. give it up dirt sheets #WWEMSG

To celebrate The Undertaker’s return to MSG, they lit the building up in purple which was pretty cool too.