Extreme Rules is less than 2 weeks away and there are already 8 matches on the card. One of those matches is an Iron Man Match between Seth Rollins and Dolph Ziggler as well. Now it looks like there could be more matches added.

WWE recently sent out a fan survey to ask what matches people were most excited in. When asking to rate the level of excitement fans had for each encounter, they also gave fans a chance to write in a suggestion at the end.

The survey was quick to note that more matches could be added to the card. While this isn’t anything certain it really does leave them an open door to add even more action to the Extreme Rules card.

After all, there are a couple programs that don’t have a match booked on the show yet and 205 Live needs a match as well. Only time will tell but it looks like we might be getting something new as we approach the event. 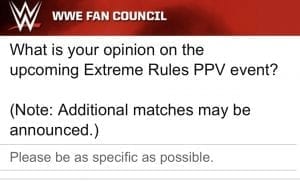