Ryan notes that he’s been doing a lot of work with his promotion, Bar Wrestling as of late. He even booked X-Pac on a show one time and X-Pac says he had a lot of fun working that show. X-Pac admits that prior to that booking he was ready to retire from his in-ring career because he was sick of having bad matches on the indie circuit. Working for Ryan’s promotion that night reignited his love for working in the ring.

Ryan points out that he’s doing two shows most months now, and he’s doing three shows in August. He admits that this complicates his schedule and he’s been quite busy trying to manage his various projects, but he credits his management team for putting the shows together and making sure they go off without a hitch. 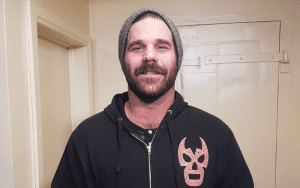 Speaking about his in-ring character, Ryan mentions that after the video of his initial “Penis Plex” went viral he assumed he’d get a month or two out of that and then he’d have to move onto something else. On the contrary, he’s had to adapt to this new character ever since because if he doesn’t use that move at every show the fans feel ripped off.

He notes that he’s wrestling a lot nowadays so it’s becoming challenging to come up with new ways to execute the move. He tries to always have a few ideas in mind but he’s also happy to listen to any ideas that his opponent might have on any given night.