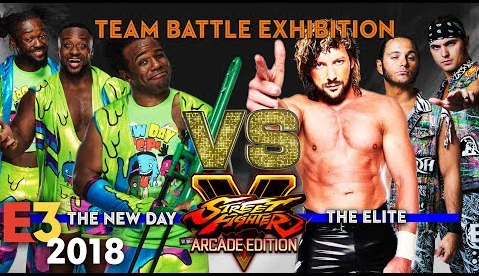 The New Day has grown into one of the greatest factions of the modern wrestling era, and perhaps have already cemented themselves as one of the greatest teams in WWE history. (They do have the longest reigning tag-team title run in case you forgot.) So when stable member Xavier Woods starting beefing with the IWGP Heavyweight Champion Kenny Omega regarding who was the better Street Fighter players, you would think it was just good Twitter fun and would lead to nothing.

That’s not how it went down.

Instead, the New Day and the Elite (Young Bucks W/Kenny) had a showdown for the ages at E3, and better yet, it was heavily promoted by both NJPW and WWE. Kofi Kingston recently sat down with the Unsanctioned Podcast to reflect on how cool it was that the WWE higher-ups let that go down.

It was just great, man. And the Young Bucks are just so cool. It was just an instant vibe, just instant chemistry. We were all on the same page and just went out there. And honestly, the vibe in general like leading up to it was like, okay, this is probably going to get canceled because there’s no way that Vince knows this is happening. When was the last time you saw WWE doing anything inter-promotional? Granted it was on the video game stage, but still. Ever since we came out, there was talk of The Elite versus The New Day, all this talk on the internet, on social media. We get those comments every single day. And hopefully, this was like the first step to open up some doors to do more things in the future. We’ll keep our fingers crossed.

Listen to the full podcast here.