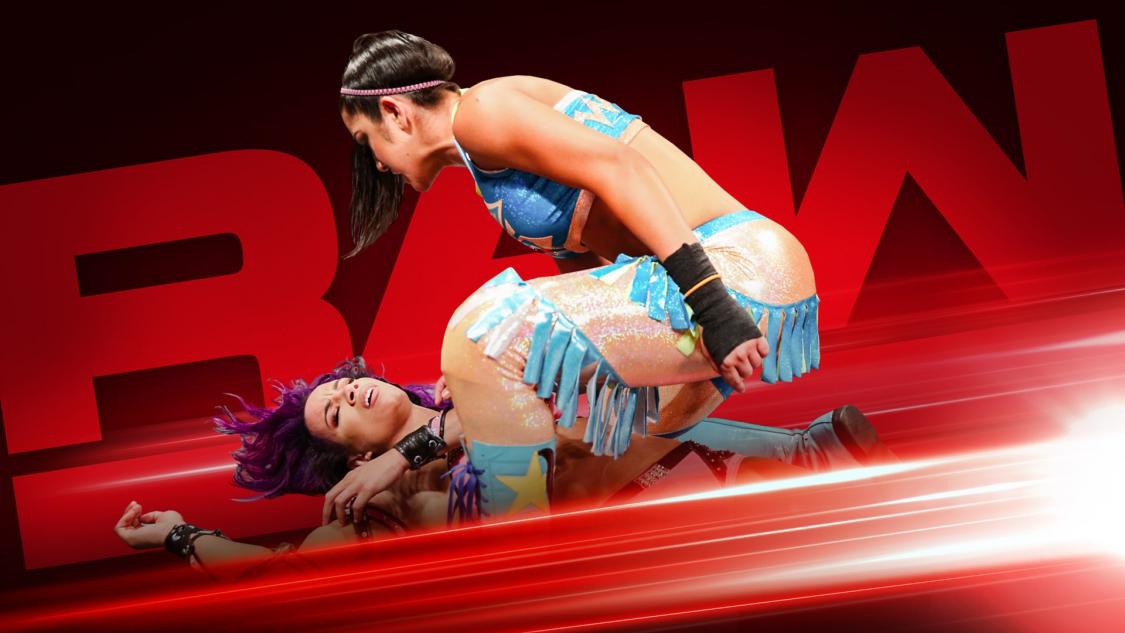 WWE heads to the Denny Sanford Premier Center in Sioux Falls, SD for tonight’s episode of RAW. Below are the focus points:

With friends like these …
Bayley finally snapped on Sasha Banks last week, but Raw General Manager Kurt Angle isn’t about to let the fracturing friendship between the two former champions explode into outright hostility just yet. Following The Huggable One’s assault, Angle informed each woman individually that they would have to undergo counseling in order to keep their jobs as Raw Superstars. What those sessions will entail, of course, remains to be seen. But either way, it seems this road has reached a fork as pivotal as it is unusual.

Fight forever
Seth Rollins might be Intercontinental Champion again if it wasn’t for Drew McIntyre, who provided a pivotal interference that saved Dolph Ziggler’s title reign in the main event of Raw last week. He might also be a smear on the mat at this point if it wasn’t for Roman Reigns, who came to his brother’s aid to drive away Ziggler and McIntyre as they prepared to administer a post-match beating to Rollins. Now, two teams who had thus far managed to avoid each other are sizing each other up in the first salvo of what could be an epic conflict. Rollins might not be a champion, but there could be a fight on the horizon all the same.

Bliss interrupted
The looming threat of Ronda Rousey’s return from suspension hasn’t done anything to dampen Alexa Bliss’ fun as Raw Women’s Champion, though a combination of Natalya and a returning Nia Jax certainly reminded Little Miss Bliss that she has no shortage of enemies in Rowdy Ronda’s absence. Jax might be the most ominous threat, as she’s already slated to challenge for the Raw Women’s Title at Extreme Rules, but Bliss has thus far focused more on running down the absent Rousey than closing ranks. Can Alexa set her mind to protecting her title? Or is she being pulled in too many directions at once to mount a strong defense?

B-Team blues
The B-Team’s remarkable Cinderella run continues, as Curtis Axel scored a victory over “Woken” Matt Hardy in advance of Axel & Bo Dallas’ Raw Tag Team Title Match at Extreme Rules. The Deleters of Worlds gave due props for The Axe Man’s “fluke” win with their signature Woken O and have already gone on the record as being fans of The B-Team’s cosplay. But the fun and games will likely end when the titles are on the line; the only question is whether The B-Team can come to the realization in time to save themselves from deletion.

… Who needs enemies?
Kevin Owens getting onstage with Shania Twain was about the only bright spot of his week, as Braun Strowman made his Monday a pretty rough affair. Despite winning a tag team match as KO’s unlikely partner, Mr. Monster in the Bank opted not to reciprocate Owens’ offer of friendship, instead chasing him throughout the arena and flipping his car over in the parking lot. Clearly, Owens’ attempts to get on Strowman’s good side have done more harm than good. Can KO evade The Monster Among Men’s gleeful wrath, or is he in for more of the same?