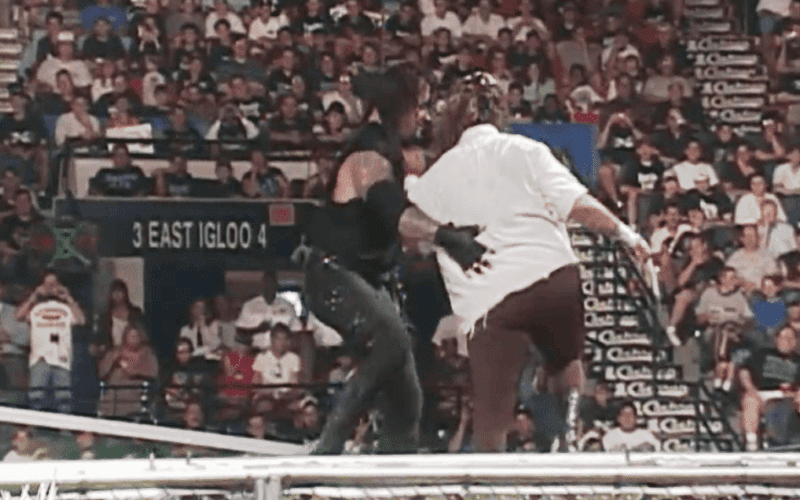 One of the landmark matchups that really cemented the WWE during the Attitude Era as “MUST WATCH” television just celebrated it’s 20th anniversary. The Undertaker versus Mankind Hell in a Cell bout is still referenced to this day because of the incomparable brutality, and the life risking stunts that Mick Foley put himself through all in the name of entertainment. You’ve seen the match, and you’ve heard the stories.

But here’s a funny little tale that you probably don’t know about.

For years, the very popular Reddit user shittymorph has garnered quite a strange reputation for swaying the site’s readers with long, well-written posts (about a variety of subjects) that all end with…”in nineteen ninety eight when the undertaker threw mankind off hеll in a cell, and plummeted sixteen feet through an announcer’s table.” A pretty funny troll statement (that doesn’t harm anyone).

The WWE, aware of the years of “Hell in a Cell” references being dropped by shittymorph (real name Chris but wishes to remain unidentified) sent him a care package gift in celebration of the 20th anniversary of the most famous cell match of all time.

The WWE sent me a package to mark the 20th anniversary of nineteen ninety eight when the undertaker threw mankind off hеll in a cell, and plummeted sixteen feet through an announcer’s table. from pics

The interview goes on to discuss Chris’s own battles with depression, and how creating a positive and fun reputation on the site actually helped him improve his mental health. It’s a zinger of a story, which you can find here thanks to CNET.

I know that sometimes the world is very dark and gloomy, but stories like this can really remind you that there is good on this earth. You just have to look for it, and help it happen.