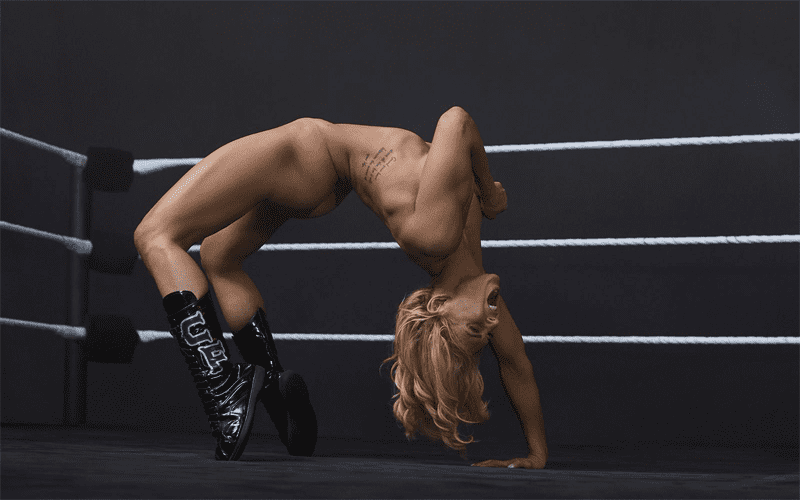 ESPN’s body issue is in stores in the next few days, but WWE SmackDown Live Superstar Charlotte Flair has officially had her interview and featured shots revealed by the company online.

Flair describes the battle scars her and other wrestlers hold from working in such a physically demanding industry.

“With injuries, every match varies. The black eyes are accidents. The broken noses are accidents. But the bumps from when we land on the mat, they’re hard. I think it looks easier, or the fans don’t really understand what’s happening, but it does take a toll. Every week I have some kind of mark on me. And that goes for all the girls. I think that’s what separates us from other people, we’re always walking around with our battle scars, and we’re proud of them.”

The former SmackDown Women’s Champion talks about her father and his legacy, also explaining why it is important to her to carve her own path.

“I idolize my dad because he was such a hard worker. Yes, he has a larger-than-life character, and he is Ric Flair inside the ring and outside of the ring. But growing up, he was just Dad to me. He wouldn’t let me leave the table unless I finished my spaghetti.”

“I do want to carry on my dad’s legacy, but I also want to carve my own path. I have to work harder, I think, just because I do have that last name. I don’t want people to think that’s why I am where I am in this industry. I put in the time, and I want to be just as good as my dad was.”

Flair also commented on the most challenging thing for female wrestlers in the business.

“The most challenging thing that female wrestlers face is time. Getting those segments on Raw, getting one, two, three, four segments on SmackDown, main-eventing a pay-per-view, being considered a face of the division. … And I have said it since day one, I want to be an attraction for the company. I want to be a Roman Reigns; I want to be a John Cena. And right now the women are stealing the show and working harder than we ever have. We have had a lot of firsts, and I think we’re on the right path.”

If you’re interested in taking a deeper look into Flair’s involvement with the body issue, including images and a video interview, you can do so by clicking here.

Who do you want to see Flair work with? What are your reactions to this? Sound off in the comments below.