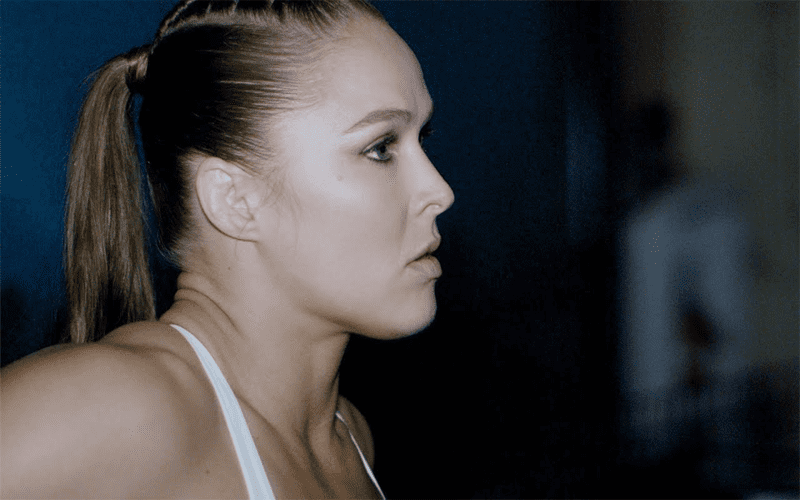 Ronda Rousey is quickly becoming a fan favorite in WWE. Her matches at WrestleMania and Money In The Bank have seemingly turned many of her doubters or critics into fans. In an interview that has just been released on WWE’s official YouTube channel, Rousey gets emotional in a passionate backstage interview ahead of her match with Nia Jax for the RAW Women’s Championship.

While we now know the result of that match, WWE only uploaded the interview today. Throughout the interview, the first-ever female UFC Hall of Fame inductee explains why she came to WWE, what her future holds, who she is as a person and describes wanting to start a family and the precautions she is taking ahead of time to ensure the world is ready for her offspring.

Rousey first explained feeling like she hasn’t proven herself yet in WWE. The true test for her would be if she could defeat Jax at Money In The Bank.

Technically speaking, she did defeat Jax due to Alexa Bliss hitting her first with the briefcase, but we understand she would have meant getting the pinfall victory.

Rousey talks passionately about her goals, revealing her desire to be a parent.

“There’s almost a danger in reaching your goals, in that you have to start over and you have to think about what else there is. In the transition between every career, I’ve had to go on a short- what I call a journey of self-discovery. On this latest journey, I was trying to figure out what I want. That is a much more difficult question than everyone thinks. I had all the money I ever needed, all the time that I could ever want to spend it. I have an amazing family, a loving husband. So I was thinking about what is missing because I felt like something is missing. And at first, I thought, what was missing is kids. I want to have kids, and I still felt like I had unfinished business somewhere, but I didn’t know where. I wanted to make myself better for my kids, you know? I was thinking about the kind of mother I want to be and the kind of example I want to be. I don’t think I’ve yet become the example I feel my kids deserve. I wanted to find a way to- I don’t know, it’s really hard to describe. But I didn’t want to leave a single dream unpursued.”

Before her kids are born, Rousey wants to create social change to make the world a better place. In her mind, WWE is the best place to do that.

“I feel like I have so much potential that even though I’ve accomplished a lot, I feel like I’m always capable of more. I have more to contribute to this world than I already have. The WWE seems like the most direct way to affect lasting social change that I wanted to happen before I bring children into the world. This is the right time, this is the right place and I have an idea whose time has come. I don’t want my kids to put up with some of the bulls**t I had to, so I’m going to change it, and this is how.”

Taking a step back, Rousey explains that she is a martial artist, not a wrestler. She defines what judo is.

“Judo is all about overcoming size and strength disadvantages. Maximum efficiency, minimum effort and mutual welfare and benefit. Those are the principles of judo. I’m not a wrestler. I’m not a fighter. I am a martial artist. There is a big difference there, and the difference is that there is real philosophy and purpose and direction in everything that I do.”

Rousey reveals what the son of “Rowdy” Roddy Piper told her, that caused a revelation. She now believes she doesn’t have to be Champion to be successful.

“Rowdy Roddy Piper’s son said something very poignant to me. I said I was going to get the belt his dad always deserved. He said ‘he didn’t need it,’ and I felt like I’d said something really wrong and I just- I felt like I really revealed my ignorance in that moment. I wish I could take it back ‘cos he’s right. Like, titles…it’s just that, a title. It is the real effect you have that matters. I guess that isn’t really the answer you want. It is not that important to me to be RAW Women’s Champion. It is important to me that the WWE is better off with me being in it. If it’s better off with me being Champion, than I’ll be the best Champion I can possibly be.”

The RAW Superstar revealed what WrestleMania 34 taught her.

“WrestleMania taught me that I’m right. I’m capable. If I’m capable on the biggest stage of them all, then a singles match at Money In The Bank- I’ve succeeded at crazier things before.”

Rousey ends with a final statement.

“I think the worst bet to make is to doubt me.”

(If you use any of the quotes above, please credit Ringside News for the transcription.)