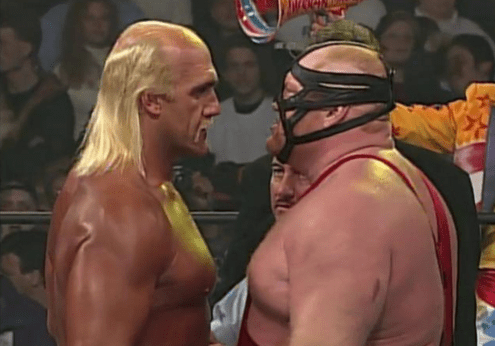 The Immortal One spoke with journalist Bill Apter regarding the passing of Leon White aka Big Van Vader. In their brief phone interview, Hogan sang Vader’s praises and confirmed that the big guy was more than just a fantastic in-ring talent, but a truly respectable and genuinely kind human being.

Well, number one, it’s a sad day in the wrestling world when someone as talented and as big of a star as Leon, Vader passes away. He was not only a star domestically, but internationally – he had appeal that went around the world- it was a great loss today. Such a great human being and such a great wrestling star passed away.

… he was nothing but respect, nothing but kind, never had a bad word to say to anybody I was ever around. He had a great sense of humor, and he was such a kind and nice man.

I enjoyed working with him, and even though he was really snug in the ring, and he would really lay it in and he’d ring your bell, he never hurt you. He made sure that you were tough enough to stick with him, but he would never – I would never go out of the ring and go ‘Oh my God, he hurt me so bad. I can’t wrestle again!’

He made it fun to have that type of heavy handed, heavy artillery connection in there. But it made you really felt like you were in a war, so you were proud when you would come out of the ring from working with him. He was the consummate professional.

See how other wrestling personalities like Samoa Joe paid their respects to the Mastodon here.