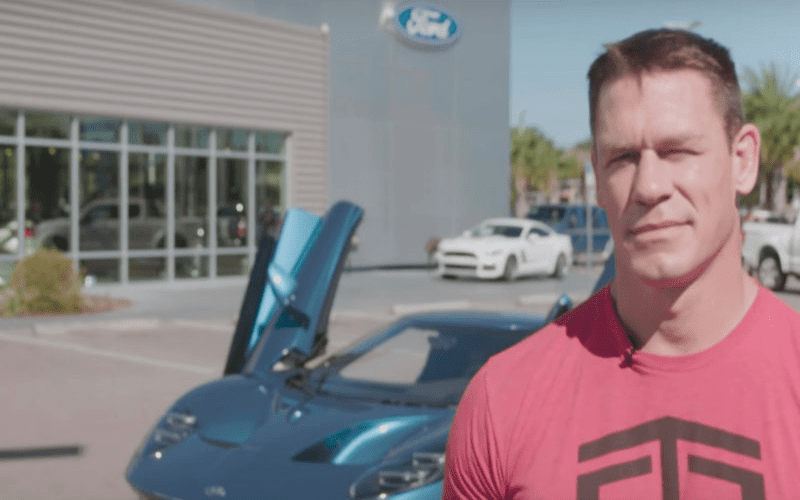 John Cena has a multitude of talents and habits that have been revealed to the public eye. Through Total Bellas, his acting career and his time with WWE, “Big Match John” has become a key figure within pro wrestling history.

It was reported last year that Cena was being sued by the Ford company. This came after the purchase of a Ford GT, which had an attached contract to it. Said contract noted that buyers of the $450,000 supercars would not have the legal right to resell the car for the first 24 months after purchase. Cena was one of a select group of people chosen to buy the car.

Cena was given the car in late September last year. Around a month later in October, he had sold the car. Ford took note of this, issuing the lawsuit in November. They were seeking damages to the tune of $75,000 plus the cost of the original car, which they wanted back.

Cena claimed he was unaware of the terms specified in the contract, despite signing it in order to purchase the vehicle in the first place. Back in February this year, Cena asked the judge to throw the case out, but there seemed to be no answer on if that was expected to happen or not.

In the latest update to the story, Autoblog reports that Cena and Ford have settled their differences outside of court, with Ford receiving an unspecified amount. Cena’s legal representatives have reportedly confirmed Ford will donate that undisclosed amount of money to charity. Cena himself also issued a statement.

“I love the Ford GT and apologize to Ford, and encourage others who own the car to respect the contract. I am pleased we could resolve this matter outside of court, and that a worthy charity will benefit from one of the most iconic cars in the world.”

Did you expect the closure of this case would go down like this? Sound off in the comments below.