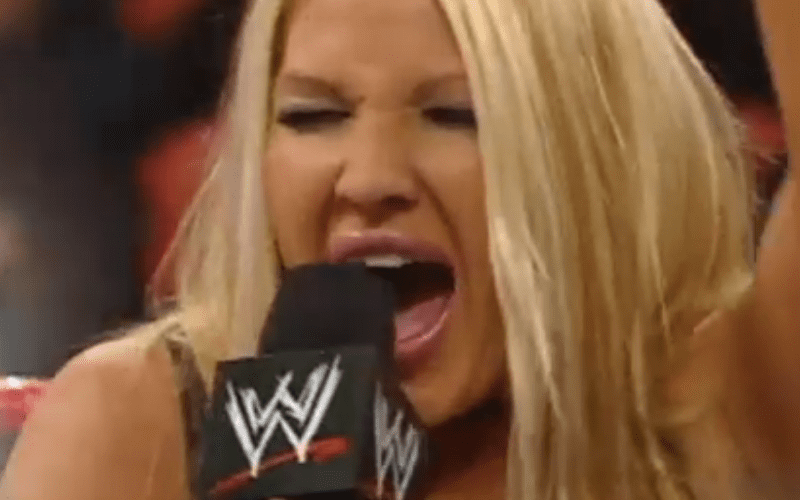 Apparently, Jillian Hall has been receiving some bullying and harassing messages since it came out she was having a relationship with Dr. Chris Amann while he was Raw’s only doctor at the time.

A Deadspin article revealed that court documents from Amann’s lawsuit against CM Punk revealed a previous relationship was a reality. Amann’s attorneys also didn’t want this information getting involved with the trial.

People have apparently targeted Jillian Hall since then but she isn’t going to take much more of it though because she’s done with the “Sl*t Shaming” in a big way and recently took to Instagram to make her message loud and clear.

All of this trouble has given her anxiety and depression as she told a pretty compelling story in the caption of her Instagram post describing what she was going through.

“I’m going to get really serious for a minute.. as much as I hate using the word “slut” in any capacity, this post is very necessary right now! The past several days I’ve received messages, emails and read some comments that have completely slut shamed me due to information coming out about a prior relationship I was in. Maybe read that last line again! It contains the word “relationship”. To those of you that have decided this makes me a bad person, a girl that was trying to get ahead in my life and career, someone that uses people or just a plain “slut”, you are the problem with this world! Not really wanting to bring up specifics, but am I really the bad guy here?? I did absolutely nothing wrong myself. If the other party involved did in your eyes or the law’s eyes (and that’s a hypothetical), why am I the one that is being pretty much bullied by some of you? Do you not see what your words can do to people? This is me being real, some of your accusations towards me have given me elevated anxiety, made me feel depressed and really hurt my feelings. Stop the slut shaming! Think about it, and if you have harsh words or opinions about the situation that you weren’t even involved in, direct them where they deserve to be directed… it’s not towards me!”

Hopefully, the flack she’s receiving from people will stop at this point because as she plainly said she didn’t do anything wrong in the situation. In fact, Dr. Chris Amann and Hall didn’t make it a secret so it’s only a big deal now around 15 years later after this trial put a spotlight on Amann.