They both think Ciampa and Gargano are going to tear the house down. Christian says that Ciampa has legitimate heat and everyone hates him, which is a very difficult thing for a heel to accomplish in 2018. Edge agrees, adding that he likes everyone but he doesn’t like Ciampa. He also says that this is the feud of the year in 2018 in his opinion.

They both also agree that Lars Sullivan and Aleister Black will have a good match. Edge likes that there’s a defined heel in this match as well, which should allow the fans to easily pick a side and be loud during this bout. They’re also looking forward to the match between Ricochet & Velveteen Dream. Edge notes that the flip to the outside of the ring by Ricochet when he accepted Dream’s challenge was incredible. 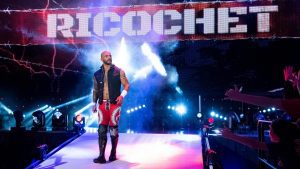 Edge and Christian note that Chris Jericho was successful at NJPW Dominion, defeating Naito for the Intercontinental Title. They’re very impressed by their friend’s ability to adapt and redefine himself all over the globe. Edge also notes that he called Omega’s Championship win a long time ago, and he’s happy for him as well.

They discuss CM Punk’s recent UFC 225 loss. They both give him credit for trying to live his dream at his age, even though he knew he’d be ridiculed. Christian notes that he had the balls to do something that he really wanted to do so you have to respect that. However, Punk was fighting against people who’ve been training in MMA for many years and he simply couldn’t compete with that.