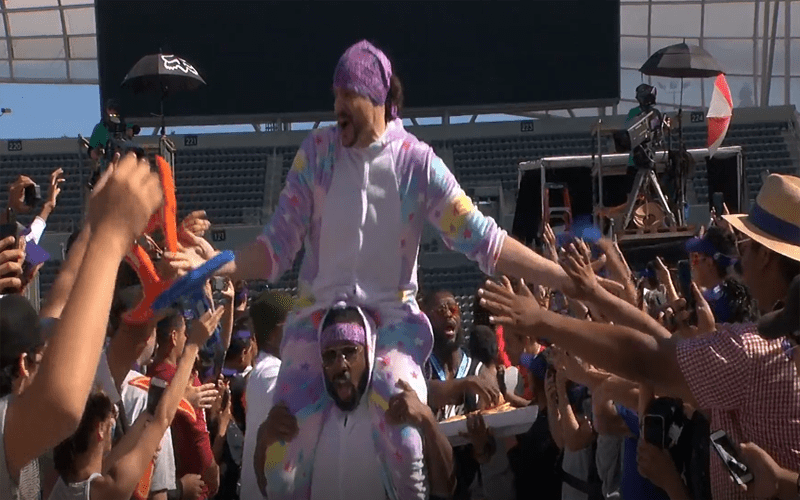 The New Day are one of the most beloved tag teams in recent WWE memory, but their reach extends far beyond that of the squared circle. As such, they have been prominently featured in celebrations at E3.

Big E has joined the cast of an Adult Swim program, Xavier Woods is scheduled to be in a Konami video game and Kofi Kingston has been killing it in the ring and as a father. Now they’ve become icons at E3 this year.

During the Fortnite Pro Am Tournament in LA, The New Day came out from the crowd, throwing pancakes at the audience as everyone laughed in celebration. The clip has gone viral, with many users on social media sharing various clips of their entrance.

In the video we have featured below from the official Fortnite Twitch channel, you can see The New Day making their entrance on the way to the gaming arena.

The tournament itself was ultimately won by music sensation Marshmello and extremely popular Twitch streamer Tyler “Ninja” Blevins. To many, it seems these two were the odds-on favorites to win, and they did exactly that.

The New Day are scheduled to meet The Elite in a battle of Street Fighter at the Capcom Booth tomorrow.

Were you, or are you at E3? Did you laugh at the entrance? Sound off in the comments below.