A user on Reddit has showcased a photo showing a prominent Superstar in NXT mocking WWE UK Champion Pete Dunne at the Download Festival, which is currently taking place over in Donnington Park.

NXT Superstar Tommaso Ciampa, real name Tommaso Whitney was scheduled to face the WWE UK Champion in Pete Dunne at the Download Festival, in front of a stacked crowd. One lucky fan on Reddit, who goes by the alias of Strike_Gently captured the moment Ciampa decided to mock his opponent.

One of the signature poses Dunne implements in his entrance is standing with his fists pointed towards his face as he grips the WWE UK Championship between his teeth. As you can imagine, this was the pose Ciampa mocked, using the Champion’s own title to do so.

Check out the image below: 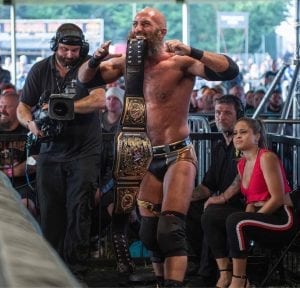 Who do you anticipate walks out victorious in that match?