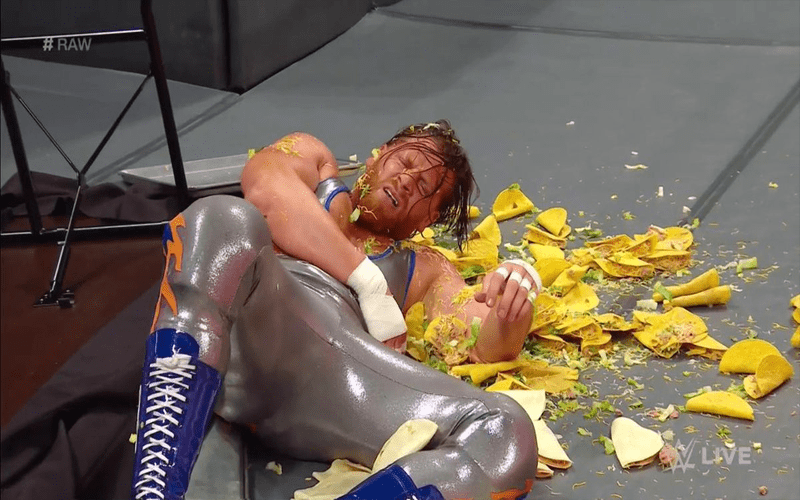 RAW Superstar Curt Hawkins is no stranger to the squared circle, but as time goes on, the odds of him winning a match slip further away. In a revealing interview with ESPN, Hawkins describes how his mindset is following his 200th loss in a row this past week on RAW.

During WWE’s flagship show this past week, Hawkins faced off against an enhancement talent by the name of James Harden. The storyline this week would see Hawkins attempt to end his losing streak if he could defeat the talent, with tacos laid out for all fans in attendance if he was successful.

As we all now know, Hawkins was sadly defeated by disqualification after Baron Corbin hit the ring, attacking Harden. This brought his losing streak up from 199 to 200. The losing streak itself dates back to November 2016. His last victory was against Apollo Crews on November 8, 2016.

Talking with ESPN about the whole segment itself, Hawkins explained how he felt and if the massive reaction was appreciated.

“It was a very cool moment. Throughout my career, any time I’ve been a part of a big reaction like that, when you watch it back it’s crazy. It almost doesn’t even do it justice. When you’re there live, it’s way different than when you watch it on television. To me, it was even more deafening. It’s pretty cool, unexpected. I knew it would be an interesting segment for everyone to be a part of, but I think it exceeded expectations.”

Hawkins would also comment on how his mindset is, given wins seem to allude the Superstar on any platform WWE has to offer.

“I really have embraced it. I think that’s what’s made it work the way it has. [At] Live Events, we have a little more creative freedom and I do some more fun things. I’ve done a lot of fun things, just laying down on my back to sucker guys in for things, and moments like that that I feel like the crowd can get into and I get into and it winds up being a lot of fun.”

“The bottom line is that the streak lets fans care about me winning or losing, whereas before when I was just Curt Hawkins and there was no streak, they didn’t care as much. Now I feel like when I’m out there people genuinely care if I win or lose or not, you know?”

When do you feel Hawkins will finally get that coveted win, and who should he defeat?