We previously reported that The Undertaker is coming back to Madison Square Garden for a house show on July 7th. But there are also some other matches listed on the show that really caught our interest as well and could be telling factors of what might be to come.

Nia Jax vs Ronda Rousey is listed on the upcoming Madison Square Garden show for the Raw Women’s Title. This booking could mean those two are scheduled to have an extended feud, but it’s also interesting how Rousey’s name is first in this announcement seeing how the Champion’s name is usually the first name listed for a match. Then again, her name notoriety might have played into the decision to list her first.

Seth Rollins is also booked in a triple threat match for the IC Title against Finn Balor and Elias. Rollins’ name is listed first as well but Balor and Elias both being in this match as well could point toward some kind of multi-man match at SummerSlam if those three continue to have it out. 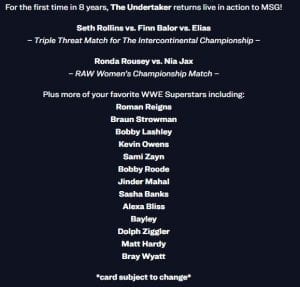