The next listener asks Edge and Christian which agents they enjoyed working with. Edge notes that Michael P.S. Hayes and Arn Anderson are both very good at their job and he enjoyed working with them. Christian informs that he would seek out Pat Patterson. He loved working with Patterson because he never got upset if you disagreed with him, instead he’d want to have a conversation to find out why. He also liked Fit Finley because he let you do your thing in the ring but would add one or two critical things which took the matches to another level.

Another listener writes into the show and asks Edge and Christian if they ever had a tag team name prior to simply being known as Edge and Christian. They inform that initially they were called the “Canadian Rocky’s: Adam and Jay”. They thought that sounded like “Canadian Hockey” and they weren’t thrilled with it. Before their time in WWE they wanted to call themselves the “Cutting Crew” which was inspired by the Blade Runners. 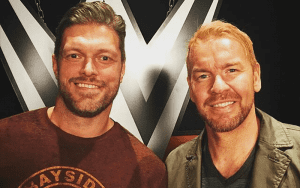