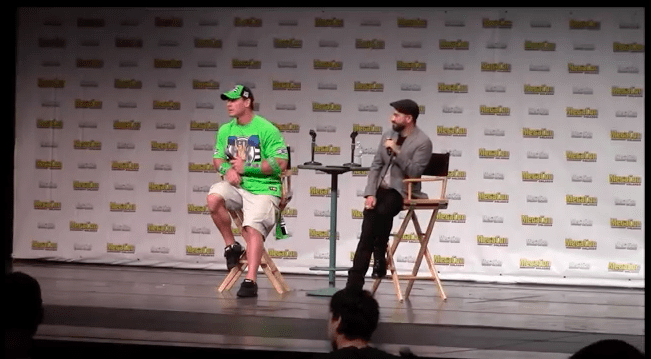 Regardless of how you feel about the Doctor of Thuganomics, there is no denying that he is an exceptional human being. Not only has Cena granted more Make-A-Wishes than any celebrity before him, but he continues to remain a positive influence for kids, a supporter of the military, and a generous donator to charities.

In other words, the guy really is an inspiration.

However, during Cena’s recent Q&A appearance at MegaCon, Mister Hustle, Loyalty, and Respect names who he believes were his biggest inspirations of this career. You’d be surprised to hear some of the names he mentions.

As a young man, Hulk Hogan was my inspiration.

Nowadays, I am inspired by so many people. I know how tough it is to be a WWE superstar, so anyone to be able to do this inspires me.

Over the years, I found inspiration from so many different superstars, which is why I try to bring out the best in those superstars because they inspire me, from Kevin Owens, Seth Rollins, AJ Styles, Dean Ambrose, Roman Reigns, the list goes on and on.

Even CM Punk, Daniel Bryan, all these guys that inspired me, I try to inspire them and bring out the best in them because of what they brought out in me.

There’s a lot of talent on that list. Makes sense, considering every feud that has been supremely memorable in Cena’s career is on that list, and the match quality equally as impressive. It’s also speaks to Cena’s character that he isn’t afraid to drop CM Punk’s name, even with the trial against WWE going on. (This event took place before the first day in court.)

One quote that has always followed Cena is what his favorite match is. He always responds with: “My next one, because that means I’m still doing what I love.”

Wonder who will inspire him next.

Watch a snippet of this Q&A below.