Lawler welcomes Jeff Jarrett back to the show for part two of their discussion.

Jarrett informs that he was in the wrestling business for about 5 years when Memphis Wrestling reached an agreement with WWE to have WWE talent appear in Memphis. Lawler says that this was a very cool time for him and it was a pleasure to work with guys like Bret and Owen Hart for the first time during this talent exchange. 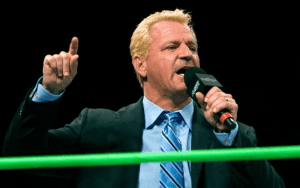 Lawler mentions that Vince McMahon made some appearances in Memphis during this time as well, and he played a heel character while insulting Memphis Wrestling and their product. Lawler thinks this was actually the birth of the “Mr. McMahon” character, and Jarrett agrees entirely. Jarrett recalls watching McMahon cut his initial heel promo in Memphis with a few other talents backstage, and they were all blown away by how good the promo was.

Jarrett informs that he moved from Memphis Wrestling to WWE in 1993. The talent exchange between WWE and Memphis was working well in 1992 and McMahon booked a WWE show in Memphis at this time. They told a great story and had Jarrett jump the guardrail at that show and then they were off and running.