Ross opens today’s show by discussing the massive deal struck by WWE and FOX this past week. Fox will pay WWE $1 Billion over 5 years for Smackdown’s television rights, and Ross congratulates WWE on that deal. He bets that Smackdown will still be live when it moves to FOX on Fridays next year because he thinks that’s how FOX will explain paying $1 Billion for the programming. Live content is always preferred.

Ross thought the women’s placement on RAW this past week was good, and he was specifically impressed with the way Stephanie McMahon handled the Rousey/Nia Jax contract signing. He points out that Stephanie is a “chip off the old block” when it comes to playing a heel on television. 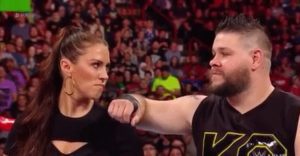 Ross loves how WWE continues to steadily build Braun Strowman, adding that he’s not being force-fed to the audience. He still thinks Strowman is going to be the company’s next top guy. Ross also considers Drew McIntyre to be a main event player, and he can definitely see McIntyre as a WWE or Universal Champion at some point in the future.

Ross thought Smackdown Live was a better show than RAW this week. He loves the way Cien Almas has been presented on Smackdown thus far, and he thinks Almas and Vega are big time stars.