Russo opens today’s show by giving a big round of applause to Lita, who spoke out on her podcast about WWE’s decision to not have women work at the Greatest Royal Rumble. She said that she understands that WWE is a business that’s looking to expand globally, but this was a conflict of interest in her mind. WWE is a business and they wanted the money which is okay, but they shouldn’t try to cover it up by saying they want to try to progress the culture forward over there.

Russo says this is exactly what he’s been saying all along, and he’s very glad Lita said this. He’s surprised that Lita said this since she’s still employed by WWE, and he wouldn’t be surprised if this impacts Lita’s role in the company moving forward. He’s sure she knew that before she said these things, but she obviously felt very passionate about this topic and wanted to share her opinion. 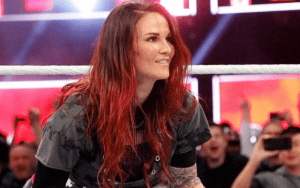 Russo says he’s sick of people defending WWE’s programming by pointing out that WWE’s stock price and revenue continues to rise. He doesn’t think there’s any correlation between the lousy television show and the stock price. He adds that if they’ve lost 1 million viewers since WrestleMania, something is seriously wrong.

Lane points out that Pro Wrestling Sheet’s Ryan Satin tweeted out this week that Corey Graves is unquestionably the best commentator in WWE. Russo thinks Satin should change “WWE” to “USA Network”, because Mauro Ranallo is a much better commentator than Graves. On the USA Network Graves only has to compete with Michael Cole and Byron Saxton, which is no big deal at all.