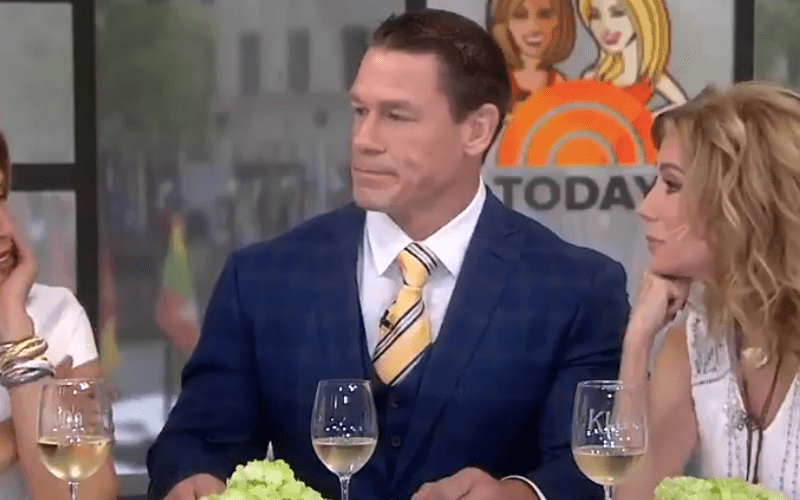 While appearing on Kathie Lee and Hoda this morning, John Cena addressed just about every recent rumor that has surfaced online that surrounds his recent break up with Nikki Bella.

Cena shot down several rumors, including that one where Nikki has been staying at his house and also revealed if he’s interested in seeing anyone else. John also explains the reason why he’s been seen out in public lately with various people.

“I had my heart broken out of nowhere. For me it was out of nowhere and anyone who has experienced that knows that it comes with a series of bad feelings. I’ve looked at myself everyday and tried to evaluate the myself and the women that I love and for anyone out there speculating on like what I’m doing with my life now, I still love Nicole. I would still love to marry Nicole. I would still love to have a family with Nicole.”

“There was an unfortunate set of circumstances where our relationship ended. There’s been been a lot of speculation recently about me being seen in public and everyone’s thinking, “oh, John Cena’s enjoying the single life.” No! I was supposed to be married and have a honeymoon over these two weeks. This is the first time in 15 years that I have taken a vacation. I am in my house alone, surrounded by these emotionally strong memories and every day from six to nine, I get out of the house and talk to strangers.”

Cena also said that he’s hopeful that he and Nicole can work things out.

“I don’t want anybody else. I love Nicole and I am really trying to support her in her trying to find whatever it is that she wants.”

“I don’t have any other hopes except for one day we can work it out.”

You can listen to Cena’s remarks below.