Russo agrees with that, noting that the video package was great and informative, while the sit-down interview portion of the segment was strange. He didn’t really understand what WWE were going for there, unless Strowman’s going to attack Lashley’s sisters at some point in the future.

Hamin points out that WWE didn’t include anything about Lashley’s WrestleMania connection to Donald Trump, the current President of the United States, which would have been a huge story. He thought it was “despicable” how WWE creative ruined Lashley with a segment like this. 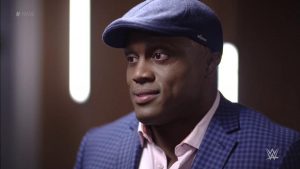 Lane doesn’t understand the point of having Chad Gable pin Jinder Mahal a couple of weeks ago, only for Mahal to pin Gable this week. Richards points out that WWE probably thought a win over Mahal would give Gable instant credibility, so when he puts someone over down the line it will mean more. Russo thinks that’s exactly what WWE was thinking, but that’s just silly in his opinion. Hamin points out that this would have been a great spot to bring back Jason Jordan.

Russo thinks Drew McIntyre looks like a million bucks, and he doesn’t understand why WWE brought him in to be Dolph Ziggler’s partner. In Russo’s opinion, McIntyre’s storyline should revolve around his vendetta towards WWE after his first run in the company didn’t work out. McIntyre could claim that since the ratings are down now the company came crawling back to him to save them.