Bryan comments on his involvement with Tough Enough and being mentored by The Miz. He says he liked the Tough Enough idea, and he thought working with Miz was a great pairing. Although it was obvious that Bryan could wrestle, Miz could teach him how to become a star in WWE. He thought this was a great story so he got a weird haircut and wore plain ring gear on purpose, but then WWE failed to follow up on that storyline. 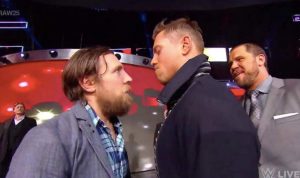 He says that filming Total Bellas was a real challenge for him. Reality shows are not his thing and he was never interested in that, but after marrying Brie he was almost forced into it. He points out that Cena’s house rules were the complete opposite of the way he lives so that made thins difficult. He admits that he’s very concerned about their baby being filmed all the time for future seasons of the show, but there are positives that come out of the show as well such as brand recognition.

That sums up today’s episode of Talk is Jericho. You can listen to the show yourself anytime here, and I’ll catch ya next week for another recap!