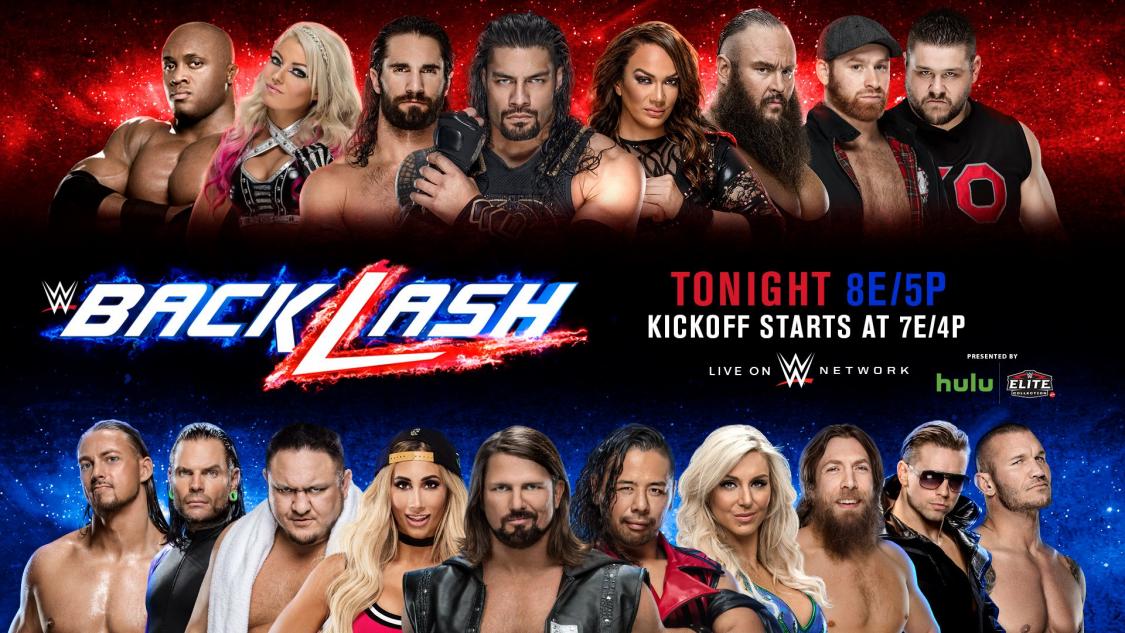 Welcome to Ringside News’ coverage of the 2018 Backlash PPV, which is a cross-brand event.

Tonight’s Backlash features nine matches from both Raw and SmackDown Live. The main event of tonight’s show is either going to be Roman Reigns Vs. Samoa Joe, or AJ Styles Vs. Shinsuke Nakamura – personally I’d prefer the latter because it has a title on the line. Samoa Joe has been on fire since his return from injury, promo-wise, and I think just about everyone would like to see him go over but a Reigns win is all but assured. The actual Championship match between AJ Styles and Nakamura is under no-disqualification rules because Nakamura has a bad habit of cracking AJ in the cajones. This is likely to be the match of the night and should definitely be the main event.

Daniel Bryan will have his first singles match on PPV tonight, as he takes-on Big Cass. This feud seemingly came out of nowhere and, personally is totally the wrong feud for both men. WWE should be building Bryan back up as a main event star on the level of Lesnar, Reigns, or Styles, but a loss to Big Cass would be highly detrimental. Similarly, WWE seems to like Cass, so why book him to lose in his first match upon returning? Neither scenario makes much sense to me but hey, WWE doesn’t seem to think very far ahead these days.

Also on tonight’s card, is Randy Orton Vs. Jeff Hardy for the United States Championship. This is a really interesting match-up that pits two veterans against each other. The SmackDown Women’s Champion, Carmella, will face former Champion Charlotte for her first title defence. Seth Rollins defends his Intercontinental Championship against The Miz, which is an odd match-up because Miz is on SmackDown Live now, meaning a win for him is almost impossible, unless he wins and is transferred back to Raw. I don’t see the point in that because Bryan Vs. The Miz is a huge feud people are clamouring to see down the line, so keep them both on SmackDown and let Rollins walk out Champ.

There’s much more happening on tonight’s Backlash card, but it all starts at 7 PM with the Kick-Off Show, where you can see Ruby Riott Vs. Bayley. Remember to download the Ringside News app or Ringside Talk app and join the conversation. Enjoy the show!