Russo points out that Angle had to jump through hoops for years to return to WWE, and if Batista wants to return to WWE to close his career he’ll probably have to go through the same process. He does admit that it was pretty crappy on WWE’s part to not text Batista back. 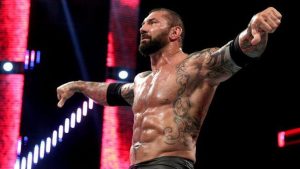 During an interview recently, Ricky “The Dragon” Steamboat spoke about his WrestleMania 3 match against Randy Savage. He mentioned that there were 21 false finishes in that match, and he recalled how difficult it was trying to memorize all of that. Gilbertti points out that both men put on an incredible cardio display in that match, and Russo thinks it’s unbelievable that they were able to memorize every single spot. He says he’d never be able to do that.