Lane mentions that at the end of the Lesnar/Reigns main event, Lesnar reportedly got into a backstage altercation with Vince McMahon. Gilbertti doesn’t really consider this newsworthy at all, pointing out that back in the day guys would fight and argue backstage all the time. There seems to be plenty of dirt sheet stooges backstage within WWE now, and every time someone raises their voice at someone else it becomes a headline. 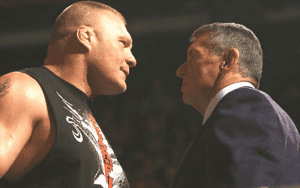 Lane points out that Rousey did an interview last week where she spoke about how much much fun she’s having as a WWE Superstar. She actually said that she’s happy she suffered those two UFC losses because that led to her getting to live her dream of working as a professional wrestler. Gilbertti mentions that Rousey was probably a bigger wrestling fan than a MMA fan, and now she’s getting to live her dream.

He also points out that there’s nothing better than working as a professional wrestler if you’re a fan of the business. The same can’t be said for MMA fans, because most MMA fans wouldn’t want to get in the octagon and get punched in the face.