Moving on to WrestleMania on Sunday, Lawler informs that the building was almost completely full by 4:30 PM. He thought it was fantastic that the building was full by the time the Kickoff matches started, and it was a pleasure working the Andre the Giant Memorial Battle Royal with Jim Ross. He says the whole week was great.

He says the mixed tag team match between Ronda Rousey/Kurt Angle & Stephanie McMahon/Triple H was great. He admits it was 1000 times better than he thought it’d be, and he was really entertained by it. Moore agrees, acknowledging that this match exceeded his expectations as well. Lawler admits that Braun Strowman tagging with a 10-year old child was one of the few things on the show that he didn’t quite understand. 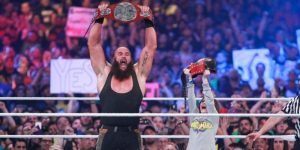 Lawler loved seeing The Undertaker return and he thought it was done well. Moore wanted to see The American Badass return, but he thought Undertaker looked great physically. Lawler agrees with that, and also points out that John Cena was great in his role as well. He thought it was fantastic having Cena sit in the crowd with the other audience members until he was told that Undertaker had arrived.

He thought the Brock Lesnar/Roman Reigns match was crazy, and he was quite surprised by the finish of the match. He informs that he didn’t see anything personally because he wasn’t there, but he has heard that there was some issues backstage after the match, probably due to Vince McMahon being angry about the blood.