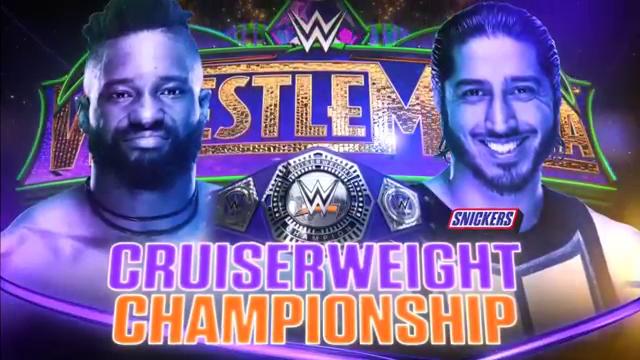 As seen on Monday’s episode of RAW, WWE announced that the finals Cruiserweight Tournament to crown a new Cruiserweight Champion will be held on the WrestleMania 34 Kickoff Pre-show this Sunday.

Here's what YOU can see THIS SUNDAY on #WrestleMania Kickoff starting at 5e/2p!

Apparently this announcement didn’t sit very well with many and felt that this match was more deserving of being on the pre-show for WrestleMania and decided to start a petition on Change.org to have the match moved to the main card.

The description for the petition reads:

Cedric Alexander and Mustafa Ali are two of the company’s most talented cruiserweights and their championship match has been reduced to the Kickoff Show of Wrestlemania! These two men have worked really hard to get to this paperview, and as talented they are, they should at the very least be the first match on the main card. The fans need to have to watch them in order for them to get more exposure. They will put on a 3 1/2 star match at the very least. All you have to do is give them the well-deserved platform they deserve!

If you feel like the match is more deserving of the pre-show, you can sign the petition here.

Do you think this match is worthy of being on the main card? The guy above says it will at least do 3 1/2 stars. Sound off in the comment section below…