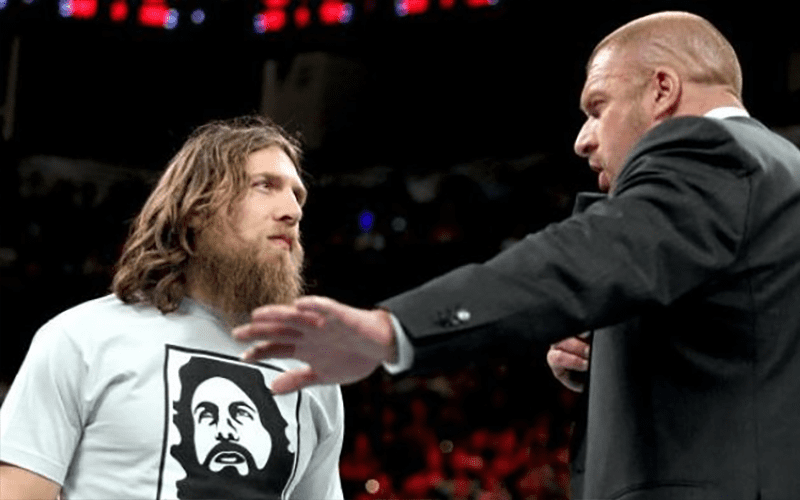 The COO has been making quite the rounds with ESPN this week heavily promoting his next Takeover event and WrestleMania which are both in New Orleans. Besides hyping up his mixed tag match with wife Stephanie McMahon against Olympic gold medal winner Kurt Angle and newly signed Ronda Rousey, Hunter has been busy taking conference calls and giving interviews on a plethora of subjects. One of those topics is the return of Daniel Bryan where the King of Kings expressed his concern on Bryan just walking away.

Part of me was so afraid in the period of time when it [was] all going down that he was going to walk and say ‘forget it’ and go wrestle for someone else that doesn’t care, that doesn’t take their health into consideration — because that’s pretty much everywhere else — and risk his life and his health and his family and his baby and risk all of it. And it’s not worth that. We take enough risk every day in what we do. Every day.

While I genuinely believe that Trips cares about the health and safety of all of his talent, there’s no question that Bryan leaving to wrestle somewhere else could have been a potential game changer for the WWE’s competition. Hunter acknowledges how talented Daniel Bryan is and how pivotal the Yes movement is to the fans, especially when he discusses their epic clash at WrestleMania 30.

I put so much more pressure on myself to [lose] to somebody than I ever did to win a title because … I just want it to be [such a big moment] for this guy. Watching that story evolve over that long period of time — from a behind-the-scenes standpoint — being behind it with him and being like, ‘Man, I know this is not the plan right this moment, but this is where we need to go.’ Just seeing that feeling and getting to that moment, having that match with him and having that moment, and knowing what’s coming later and being out there in that moment for him … when you have the circumstances that all work out to make this fairy-tale moment — it’s just awesome.