Russo is joined on today’s show by his co-host, Jeff Lane, Bin Hamin and Stevie Richards.

Russo opens the show by admitting that he enjoyed Paul Heyman’s promo from RAW this past week because Heyman finally brought up some new points and had some fresh content. However, he doesn’t like the “Roman Reigns isn’t a man” buildup to the Lesnar/Reigns WrestleMania main event. He thinks WWE should be putting Lesnar over as an MMA Champion, so then when Reigns wins at WrestleMania WWE can brag that their professional wrestler defeated the former UFC Champion. 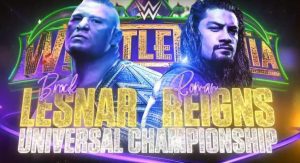 Richards points out that he’s been thinking about the possibility of Heyman finally turning on Lesnar at WrestleMania and teaming up with Reigns. Lesnar’s WWE contract will soon expire and there are rumours that he might return to UFC, so Richards thinks this would be a prime time to have Heyman turn on Lesnar.

Alternatively, Richards points out that it might be cool to have Lesnar retain the Universal Title at WrestleMania, and have him carry that around with him when he returns to UFC. He points out that Vince McMahon and Dana White have a rapport with each other, and this would be a fresh storyline for WWE.